Match Day is the one day in the life of any medical school graduate when anxiety is at its peak. And for the 2020/2021 season, a few things can be said about the results.

Due to the impact of the COVID-19, this season was entirely unique as it presented new challenges. By and large, the fluctuation in results wasn’t nearly as enormous as expected.

The match rates of 2021 still resembled those of previous years. What does this tell us? While the pandemic did shake the tables a bit, the rates didn’t really plummet. 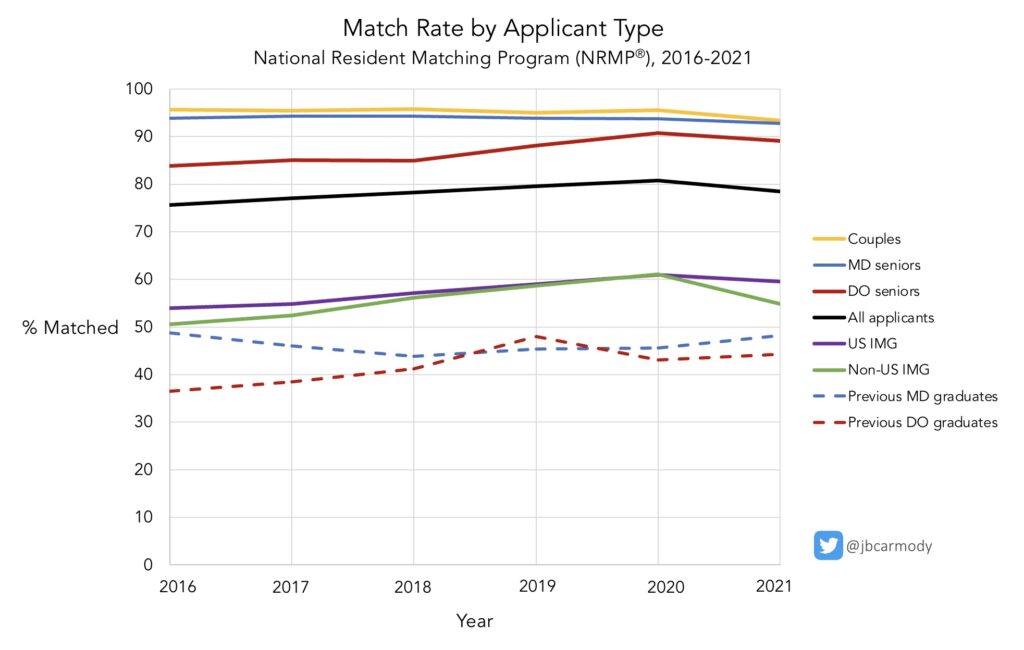 Unmatched MDs and DOs realized that they were about to have it tough yet again as the application system didn’t favor them. Many had expected that it would finally be the time for previously unmatched doctors but it’s too bad that only 48.2% of US MDs and 43.3% of DOs got matched successfully.

Putting into consideration the fact that NRMP did underestimate how many doctors truly didn’t have a residency match, the real statistics are more like 43.1% and 37.3% (sighs).

As Match day 2021 drew close, there were growing speculations from different people. A particularly interesting fear stemmed from the fact that applications were significantly increased. Apart from that, the fact that virtual interviews became the new normal due to the pandemic raised the risk of the same set of applicants getting called for an interview multiple times. The real problem, of course, was what this could lead to: many unfilled programs and many more unmatched applicants.

The Association of American Medical Colleges (AAMC) also tightened the tension quite significantly by their announcement which threw people into further panic.

As if the fear of the uneven distribution of interview invitations was not enough, AAMC told students in December to consider applying to more preliminary programs. They didn’t let up on their panic-inducing standpoints because they also said something along the line of this year’s Match being “strikingly different”, and that was only a week before the D-day.

The stance of AAMC on the approaching match day seemed rather brash, a direct contrast to Thalamus who were much more considerate of the people’s feelings. They were more willing to share their preliminary data as well as the data at the end of the season, and that without spreading panic. 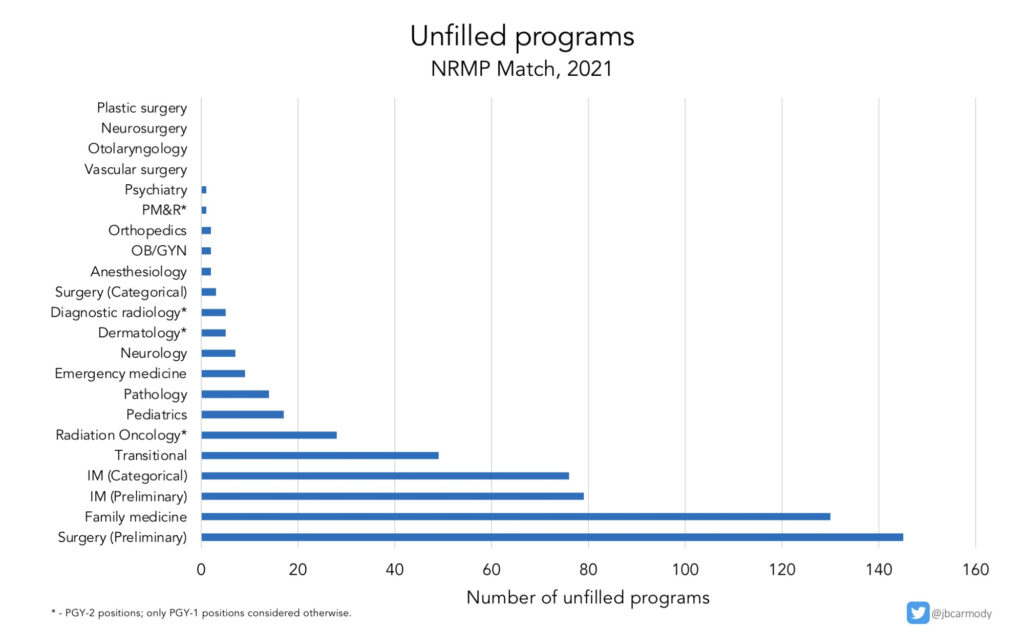 After the whole exercise, many programs got filled although applicants’ match rates dropped a little. 94.9% of program positions got filled and in the end, the SOAP had only about 2000 positions available, statistically, this was a 3.6% decrease from 2020.

To break this down further, multiple specialties duly got every position filled and only a few others (pathology, pediatrics, radiation oncology, internal medicine, and family medicine) actually went unfilled by about ten categorical programs.

Due to the Covid-19 that gripped the world, virtual interviews for open residency positions became a possibility. Before now, it would have been hard to even think it could work, but necessity they say is the mother of invention.

As effective and as necessary as this adjustment is, applicants felt that something was missing. Virtual interviews took away the in-person interaction or what you will call face-to-face communication.

Some of the students, later on, complained of the fact that they had to strain over WebCam angle, background, and so on. Not to talk of the fact that virtual interviews can be distracting with the awkward interruptions that sometimes plague them.

Most glaring of all the cons was the inability of the applicants to feel out where they would be working for the next couple of years.

Now, this next point is just by the way. Is there something about ERA’s traditional crash just before Match week that’s suspicious? They do it all the time- crash and then apologize.

Anyway, the cons of virtual interviews previously stated are what they are and they don’t hold water when it comes to discouraging more virtual interviews in the application processes. Many big institutions have already proclaimed that they are sticking with the idea, after all, going virtual helps them achieve most of all they want to in an interview, and at very well reduced costs.

The big take-home in all of these is simple. Through it all, there’s one obvious fact with residency programs and applicants. That’s the fact that the programs desire to fill up and the applicants want positions. 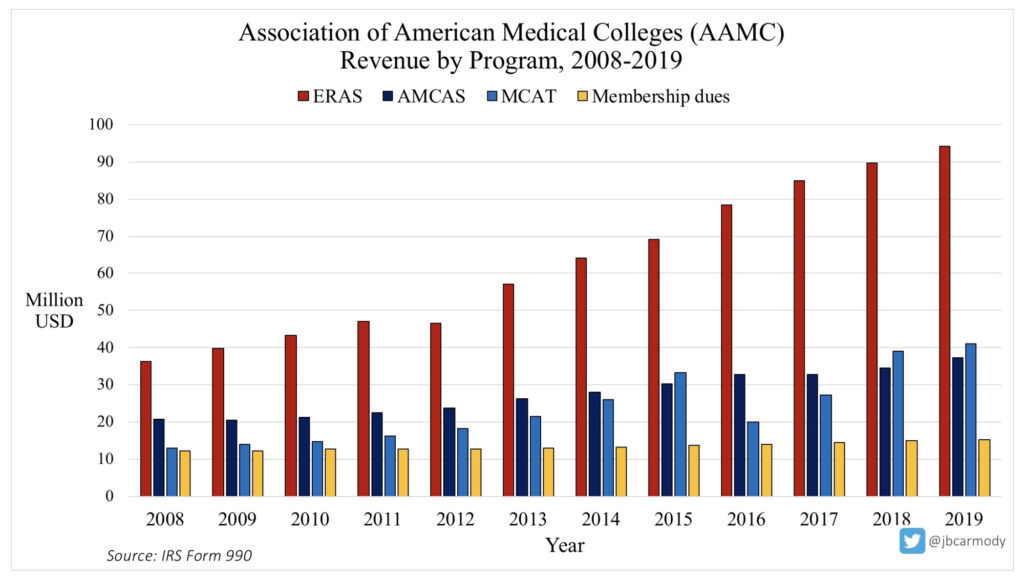 Worse, the number of applicants keeps rising. Yes, there’s SOAP and after SOAP, there’ll still be a chance to pay $10 to apply to the remaining few positions, but you can’t begin to imagine what’s about to go down.

There are about 10,000 applicants desperately still looking to get matched even after SOAP. While trying so hard not to sound like a prophet of doom, this has to be said: the approaching battle will be crazy. Already, many have paid plenty of money to be able to submit hundreds of applications during both SOAP and the regular cycle, and many more will still pay.

Ultimately, a phenomenon called application fever is taking over the scene yet again. This means that students keep forwarding more residency applications every passing year. Just how much of this can the system take?

You will agree that it’s overwhelming and despite the fact that programs tried by raising the number of interviewed applicants by 15%, it’s not going to fly by next year.

It saved this year’s Match from getting ruined, but it’s not likely to do the same by next year when the number of unmatched doctors would have increased again significantly.

Here’s our two cents. Maybe, just maybe if selfishness can be eliminated from this whole process, things would look up. The programs looking to fill and the applicants looking to get in can help themselves without necessarily aggravating this crazy maze.

The most recent application cycle has proven that with innovation and refusal to honor self-interest only, the processes leading up to the Match can become more efficient and beneficial. All it takes is innovation, reformation, courage and determination to make this work.